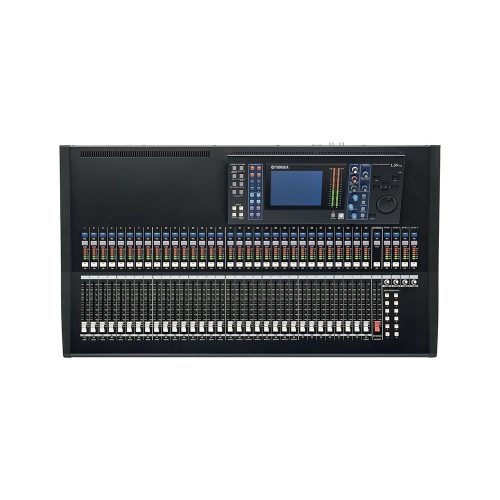 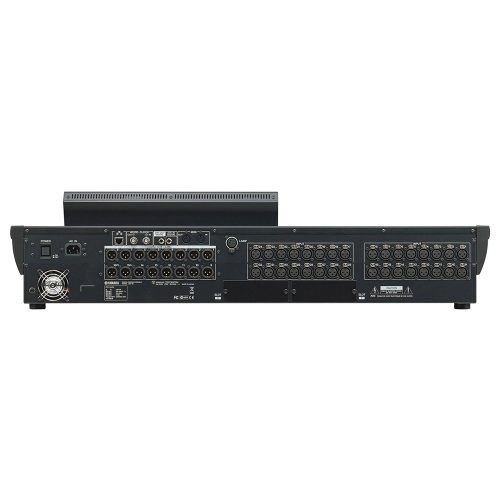 With 32 input head amps the LS9-32 can comfortably handle the complex and varied source requirements presented by a wide range of live sound applications, but it’s always reassuring to know that you can expand it up to 64 channels by just adding external preamps and Mini-YGDAI interface cards for those extra demanding line-ups.

Lightweight and Compact for Superior Portability and Handling

While maintaining the functionality, sound quality, and operability of high-end Yamaha digital mixers such as the PM1D, the LS9 series consoles are small and light enough to be easily transported and set by a single person (LS9-32 = 19.4 kg, LS9-16 = 12.0 kg). Either of these remarkably manageable consoles can deliver advanced features and performance for a wide range temporary live sound systems as well as permanent installations.

Choose the Model that Suits Your Needs

The LS9 series includes the 32-mic/line input 64-channel LS9-32 and the 16-mic/line input 32 channel LS9-16. With it's greater input capacity and bus complement the LS9-32 is an idea choice for larger live sound applications with complex input and output requirements, while the LS9-16 offers maximum handling and operating ease for events and smaller live sound applications.

The Yamaha PM1D digital mixing console and PM5000 analog console were acclaimed by leading sound engineers around the world for their stunning sound quality. The LS9 series consoles inherit the same type of superior sonic performance thanks to painstaking parts selection and detailed attention to the design of every circuit detail ... right down to the power supply and grounding. Of course special attention has been paid to the critical had amplifiers, with outstanding results. Much of the technology developed for the top-end models mentioned above has been unreservedly applied to ensure that these mixers come out at the top of their class.

Each input channel features a 100-millimeter fader, ON/OFF key, CUE key, and 6-segment LED level meter that allow analog-style hands-on operation of the primary channel functions. Yamaha's popular Selected Channel interface allows smooth, intuitive access to the more detailed channel functions via a color LCD display and an array of logically arranged encoders. And no matter what display is showing, you can instantly return to the main display by simply pressing the HOME key. This interface has been refined and proven over many generations of Yamaha digital mixing consoles.

The LS9-32 has a total of 33 faders and the LS9-16 has 17. The LS9-32 faders control the 32 inputs and stereo output, while the LS9-16 faders control the console's 16 inputs and stereo output. Since the LS9-32 can handle a maximum of 64 channels while the LS9-16 can handle a maximum of 32 channels, both models feature switchable channel layers with the second LS9-32 layer allowing direct control of channels 33 through 64, and the second LS9-16 layer providing access to channels 17 through 32. Input sources can be freely patched to the channels as required, and a single source can be patched to two channels, for example, with one in the first layer being used for front-of-house feed and another in the second layer for monitoring. Direct LAYER keys allow instantaneous switching between layers. Both consoles also feature four stereo inputs. When you consider the compact dimensions of these consoles, this much input capacity and versatility is a remarkable accomplishment.

The LS9 consoles feature recallable head amplifiers that cover a wide 72-dB input range, phantom power, phase switching, a high-pass filter, 4-band full parametric equalization, panning with LCR capability...all the basics. But there's much more. You can choose from two EQ response types, and each channel features two dynamics processors that can be used for gating, compression, ducking, expansion, and even de-essing. There's even an attenuator (with boost) that makes it possible to take full advantage of he console's extra digital word length for extraordinary sound quality. No analog console has ever offered this amount of control.

The LS9-32 has 16 analog "omni" XLR outputs on the rear panel, while the LS9-16 has 8. For easy expansion the LS9-32 has two Mini-YGDAI cards slots, and the LS9-16 has a single slot. The expansion slots make it easy to expand the consoles with high-quality analog I/O, or digital I/O in a range of formats. The 16 mix buses can function in either AUX (VARI) or GROUP (FIX) mode. When the AUX (VARI) mode is selected the send point can be set PRE EQ, PRE FADER, or POST FADER. 8 matrix buses are provided in addition to the mix buses, and these can be used for side fill or recorder sends, or anywhere additional sends are required. For easy, efficient monitor mixing a SENDS ON FADER feature instantly assigns to send levels to the consoles faders. The output busses feature many of the same functions as the input channels, including 4-band full parametric EQ and dynamics, for extended output processing capability.

There's no need for external effect racks with an LS9 console, both models provide a Virtual Rack that's packed with a complete range of effects that will cover just about any processing requirements. Up to 4 multi-effect processors can be used simultaneously, and you can use as many as 8 graphic equalizers. The internal effect library offers 48 preset effects ... including the acclaimed REV-X reverb effects. In addition to the standard 31-band single-channel GEQ units, you also have 2-channel Flex15GEQ units that allow up to 16 15-point GEQ units to be used simultaneously. Both GEQ types allow convenient band adjustment via the console faders, and the channel ON keys can be used to instantly reset the corresponding band to zero boost/cut.

Recall Safe and Recall Focus...Right Down to Head Amp Gain

The LS9 consoles feature a built-in 2-track USB memory recorder and player that eliminates the need for external 2-track devices for many applications. It's easy to make live recording direct from the console, and it's also a convenient way to play background music or sound effects. The USB memory player is compatible with MP3, AAC, and WMA file formats at 96, 128, or 196 kbps.

LS9 series consoles allow convenient, detailed access management, which can be especially important in fixed installations. User keys (standard USB memory devices) can be issued with different access levels for different users. Access can be controlled in detail, from full console to just a fader or two, as required.

StageMix provides remote control of LS9 functions via a simple, intuitive graphical interface from anywhere within wireless range. The software has been specifically designed to allow engineers to adjust monitor mixes from the performers' positions on stage, directly controlling mix parameters via the iPad rather than having to rely on verbal directions to a second engineer.The result is better mixes in less time: a huge advantage during high-pressure pre-show setup. StageMix does not provide remote control of all LS9 parameters, but is focused on the requirements for adjusting monitor mixes on stage.

The LS9 Editor is a free software viewer/editor application for Windows-based computers. It can be used online in real time for convenient, flexible metering as well as Selected Channel parameter display. LS9 Editor is also a great way to pre-program console setups offline for significantly enhanced efficiency. In permanent installations different operators can keep their own setups individually, and load them in the console as required via a USB memory device. The Editor program is also a great way to manage safe data backups.