Ample input capacity and hands-on control in a compact console that can handle a wide range of applications.

Effective gain, compressor, and EQ setup requires a considerable degree of skill and experience. Even veteran engineers need to spend time on these important basic settings. In addition to their intuitive user interfaces, TF consoles include a number of features that contribute to faster, smoother setup of these essential parameters.

The familiar Yamaha scene memory that stores mix settings for instant recall when needed is included as always. There’s also a range of channel presets that have been created in cooperation with leading microphone manufacturers and eminent sound engineers, providing starting points that take you a long way towards achieving great sound. The channel presets cover parameters such as HA gain, EQ, dynamics, and much more, right down to details like channel name and color. Less time needs to be spent on basic setup so that more time is available for refining the mix and communicating with the performers.

The TF series hardware is packed with features that contribute to superior operability and convenience. Faders, knobs, and buttons with outstanding fit and feel work seamlessly with state-of-the-art display technology, including high-visibility channel name and color displays. The touch panel itself offers an ideal blend of comprehensive visual feedback and fast response.The physical layout of these components brings everything together in a system that offers surprisingly efficient workflow.

Careful analysis of the workflows favored by a large number of engineers has led to a highly efficient panel layout. Rather than simply providing a long list of advanced features, the TF consoles present meaningful features in the most logical and accessible way through an overall design that maximizes visibility and operability. 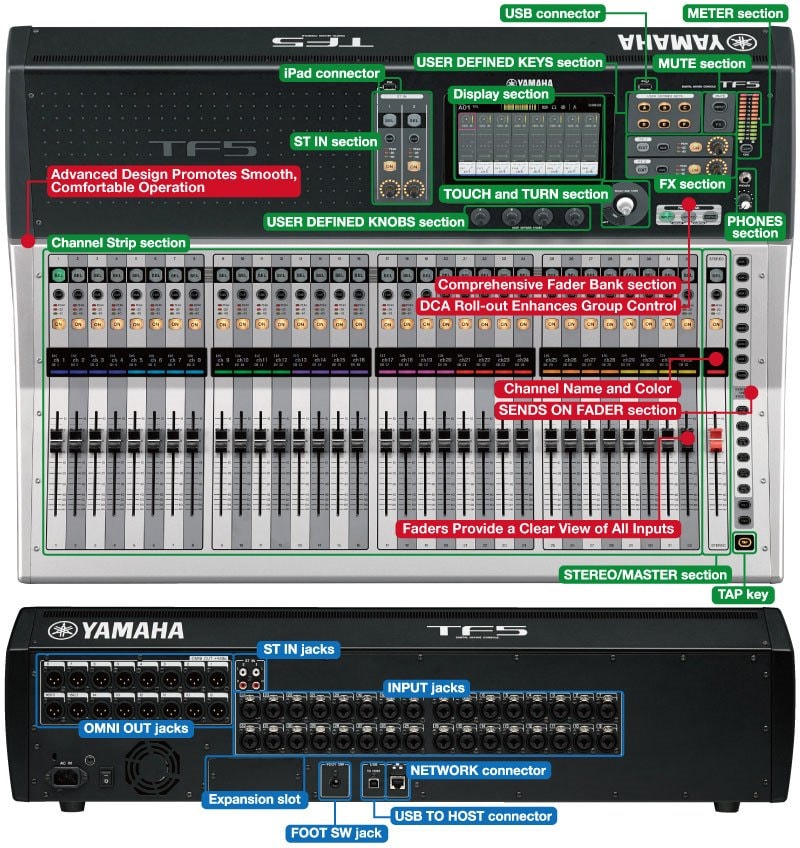 Other Features for Efficient Workflow

- USER DEFINED KNOBS section: Frequently used parameters such as compressor threshold and EQ gain, for example, can be assigned for direct, instant access when needed.

- USER DEFINED KEYS section: Assign mixer settings that you use often to these six buttons for instant access, such as direct one-touch recall of specified scenes.

- MUTE section: Multiple inputs or effects can be muted with a single operation.

- ST IN section: In addition to allowing digital playback from an iPad or iPhone or recording/playback with a USB device, you have fingertip control of BGM playback and other audio files.* When using a USB storage device for recording, use a hard disk drive or other high-speed device. (USB memory drives are not guaranteed to function properly.)

Faithful reproduction of the on-stage sound is the foundation, then creativity can take over. Yamaha’s unswerving approach to live sound reinforcement is alive and well in the TF series. The input stage of any console has a notable effect on its sonic character. The TF consoles feature acclaimed D-PRE™ microphone preamplifiers that not only deliver outstanding quality, but are recallable as well. Circuitry and individual components have been reassessed and redesigned where necessary to achieve extraordinarily pure, natural sound. That solid sonic foundation is backed up by an updated selection of high-performance processors and effects. Input and output channel processors such as EQ, gates, and compressors are complemented by eight processors that provide a broad spectrum of creative capabilities.

A Versatile Live Recording and Playback Solution for Any Application

Live recording capability is becoming increasingly important in live sound systems. From simple 2-track recording using a USB storage device* to all-out multitrack recording with a computer based DAW (Digital Audio Workstation), the TF series is ready to roll. TF consoles come supplied with Steinberg’s Nuendo Live Multitrack live recording software, providing an easy way to simultaneously record up to 34 tracks to a computer connected to the console via USB 2.0. MP3 and WAV files can be played back from USB storage devices, and audio from an iPhone or iPad can be played back via a direct digital connection. When playing back from a DAW, analog input or DAW input can be individually selected for each channel so that pre-recorded material can be mixed with live input for virtual sound checks or rehearsals.Of course BGM and sound effects can be played back too.

A High-performance Stagebox Solution that’s Simple to Set Up

The natural, musical sound that was a key element of the TF Series design policy is carried on without compromise in the Tio1608-D I/O Rack (details on following page). Mechanical construction, circuit board layout, power supply, grounding, and parts selection have all been executed with meticulous attention to detail and quality, and exhaustive performance and listening tests were carried out at each stage of development. For networking the same Dante protocol implemented in higher end Yamaha digital consoles is used for precise synchronization, low latency, low jitter, and high sample accuracy.In addition to superior performance, a Tio1608-D stage box system can be set up in just three easy steps.